Frog Education Ltd is committed to achieving excellence in everything we do and welcome feedback from all our customers to help improve our products and services.

Please follow the below guidelines in regards to raising a ticket with the Frog Support team:

2. Enter login credentials, or select register if you have not yet registered an account with Frog Support. 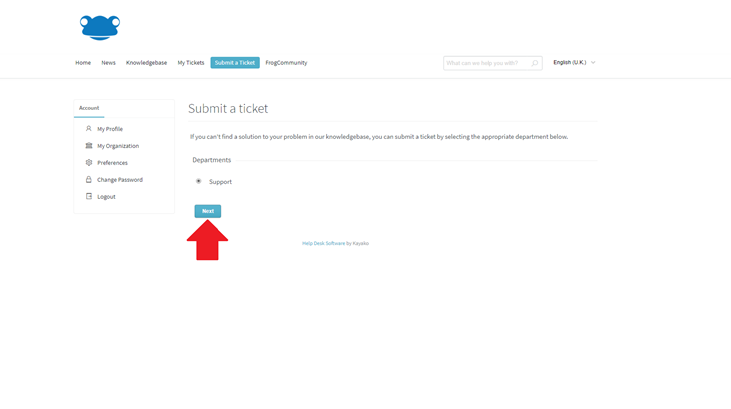 5. Select your issue type from the necessary drop down menus depending on what product you have with us

6. Enter the "Subject" as the ticket title of what issue you have.

7. Enter the description of the issue in the body of the ticket (just under the Subject field). Depending on your query, please confirm the following details so that Support can pro-actively investigate:

8. Attach any necessary files to the ticket that may be useful for the Support Team to investigate (e.g screenshots, XML files from Frog extractor logs etc)

10. Click "Submit" - this will send a ticket over to the Support Team who will in turn respond to you via email or telephone. 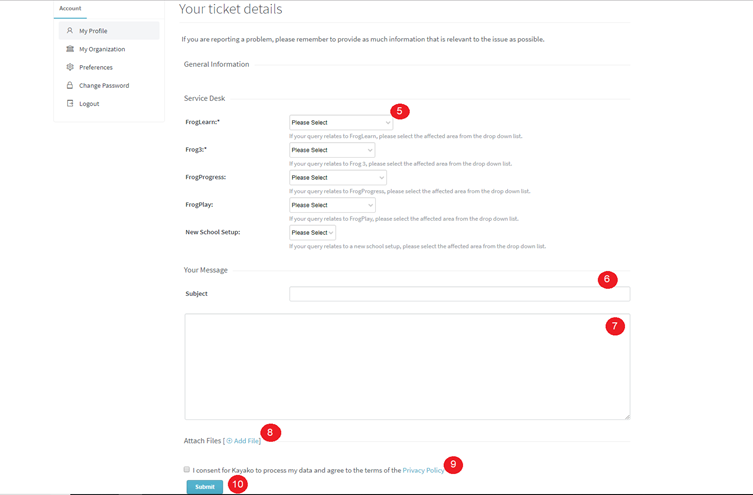 Once your ticket has been submitted to us, you will receive confirmation of your support ticket details to the email you are registered to us with. This will provide you with an individual unique ticket ID to track your query. If you wish to add any further information to your initial submission, please be ready to quote this ticket ID if you are calling via telephone, or alternatively, you can just respond to the ticket via email. This is so we can link all information relating to your query together in one place.

Please note: It is best to contact the Support Team when you are experiencing a technical issue that cannot be resolved by yourselves in the school, or you can contact us if you are unsure on how to use parts of the product.

If you are unable to find supporting documentation for the issue or question you have, please notify a member of the Frog Support Desk so we can help you further.

Our customer service policy makes clear our commitment to providing excellent services. Key to achieving that vision is a good relationship with our customers.

Occasionally, if an issue cannot be replicated externally or if the issue requires the use of local software (such as an MIS extractor problem) the Service Desk will request a remote session to troubleshoot an issue.

There are two main sources of remote software which we use with schools, however if you have a different form of software within school we will do our best to accommodate this.

TeamViewer 13 can be downloaded from: https://get.teamviewer.com/frogsupport

Once downloaded, and run, the user is presented with a screen showing two options, Allow Remote Control and Control Remote Computer.

To Allow Remote Control the user needs to provide Frog with the information in the Your ID section and the Password. This will allow us to connect to your machine from here.

Join.me can be downloaded from: https://join.me/

If you do not have the software you will need to select Start Meeting and click the large orange play button.

This will download a small piece of software to your machine. If you then run this you should see a 9 digit code which you need to provide to the Service Desk. We will enter this at our end and then connect to your machine.

What is an RFC?

RFC - A request for change - A formal proposal for a change to be made. It includes details of the proposed change and is recorded electronically on our Ideas Portal.

We have a method of requesting changes via our Ideas Portal. This will enable you to suggest how we can improve our products, see what other ideas have been suggested and leave your own comments and feedback. You will get the chance to vote for your favourite ideas and help influence our development. The best part is you’ll be able to see the exact status of your idea. We want you to know where your idea is, what we (and others) think about it and if we're going to take it on board.

The Idea Portal will give us a clear picture of what is important to all our customers and will make it easier for us to respond to your top priorities.

As a school you need to nominate a Technical Advocate, a Teaching and Learning Advocate, and an Administration Advocate (that’s school admin, not network admin!) from your school. These advocates will then have the opportunity to submit a new idea, vote for an existing idea, and subscribe to and comment on an existing idea. You will receive an email notification when changes are made to the status of an idea, or if comments are left.

We will need to set up an account for you, so if you would like to participate please just fill in this simple form and we'll be in contact as soon as possible.

Please note: Decisions for platform enhancements are not made on a singular school basis requirement but on a scale of the popularity and impact of the change request. RFCs that have a few schools associated to them may be looked at according to popularity, demand or by the impact the change may have on the product itself.

How the Ideas Portal Works

Each school is asked to nominate three advocates – one technical, one for teaching & learning and one from school administration, however, this is not a requirment. These advocates will represent the school in the Ideas Portal, posting new ideas, voting for other ideas and leaving comments.

The functionality will let you search the submitted ideas, filter by category, and see recent, trending and popular ideas.

What happens to an Idea?

The Frog Product team will be review the most popular ideas on a weekly basis – so it’s important that our customers get voting.

When an idea is first posted it has a status of ‘Needs Review’. It will be normal for an idea to stay ay this status until it moves towards the top of the idea list.

Once reviewed, the idea will be updated with one of the following statuses:

Each time a status is updated, any user who has voted, commented or subscribed to an idea will receive an email notification – so you know exactly what is going on!

Tips for Using the Ideas Portal

Only vote for what is important
If you vote for everything, then that simply raises the baseline across the whole portal. Everyone using a small number of votes to focus on what is important to them will have a much more significant effect.

Leave comments
The more information that is attached to an idea, the better. It will encourage other users to vote – and when we come to develop the idea, our team has a much clearer idea of what we need to achieve.

Avoid duplication
It’s worth searching and reading ideas that are already in the portal to see if anything already posted covers what you need. You can then vote that up the list. After all, one idea with 10 votes will rank higher then 2 ideas with 5.

What is a software bug?

What is a Bug?

A bug may occur as a result of a change in the software or a change in external factors such as browser or OS updates. 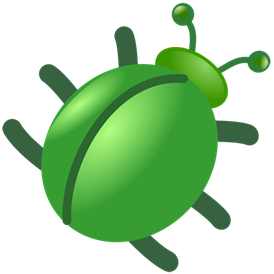 What happens in the Bug process?

1. Reported to the Service Desk

The first step in the life cycle of a bug is reporting. A bug can be reported to Frog through several channels (for example through your School Relationship Manager or Implementation Consultant) but in all situations these bugs will in the first instance be escalated to the Support Desk.

As such, we strongly recommend reporting any suspected bugs directly to the Support Desk to enable us to respond quickly and efficiently, and identify any particularly severe issues early on.

The Support Desk can be contacted by email at support@frogeducation.com or by calling 01422 395939.

The Support Desk will log you a ticket for your issue and will investigate the problem to ensure it is a bug in the software.

2. Reported to the Development Team

When the Support Desk believes an incident is a bug, they will log a bug ticket with the Development Team.

This ticket will detail all instances of the incident that the Support Desk have been able to gather along with replication steps and user credentials if required. This bug ticket is not customer facing.

You will be updated when your Support Desk ticket has been linked to a bug ticket.

3. Investigation by the Development Team

The bug ticket is passed to our Development Team and scheduled for development work. This schedule is managed by several considerations including the severity of the issue, the number of schools reporting the issue and the impact on the software.

We do our best to prioritise all bugs appropriately to ensure the best response for all issues. In order to help us do this we need all schools with suspected bugs to log the issues with the Support Desk to make sure we have all the impact information for the Development Team. In addition, if a particular bug is causing your school a lot of pain, please let us know as we may be able to adjust it's priority if you can provide impact information.

The first thing the Development Team do is confirm that the information provided by the Support Desk constitutes a bug. If it is, they continue to investigate the root cause of the issue.

Release notes containing all the bug fixes and new changes in releases can be found on the Community Site: http://frogcommunity.com

How can I track the progress of my ticket?

The easiest way to track your ticket is by using the Self Service Ticketing System. If you have your ticket ID you can either email us or call us and we will be able to check progress on the bug ticket.

We will be in touch throughout the bug life cycle as appropriate and updates will also be found on the Community Site.